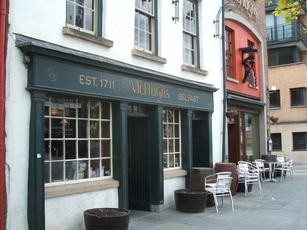 McHugh’s bar dates back to 1711, making it the oldest surviving building in Belfast. Standing in the historical heart of the city, McHugh’s has watched as Belfast flourished from a small settlement into a thriving industrial centre in the 18th and 19th centuries. With the 20th century came industrial decline and civil unrest but still McHugh’s survived and today, in an era of regeneration and renaissance for Belfast, the building remains.

Originally the commercial centre of the city, the area around McHugh’s has been the scene of many historical events. It marked the landing point for the royal visit in 1849 and played stage to the rise of the labour movement with the historic Dockers’ Strike of 1907 when Jim Larkin addressed crowds of up to 20,000 in the Square from the steps of the Custom House. These steps became known as ‘Speaker’s Corner’ and a statue there commemorates the orator and his cause.

McHugh’s has silently witnessed the rise, decline and recent renaissance of the great city of Belfast. From mass emigration to more recent immigration; the tremendous speed of Belfast’s industrial and dock growth, the destruction of many neighbouring buildings in the blitz of 1941, the sad decline of the Lagan, the docks and many industries after World War II and three decades of trouble through to the peaceful present day.

Bought by Botanic Inns in 1996, the bar underwent a £1million refurbishment and re-opened in 1998. Now, a grade ‘A’ listed building, the old McHugh’s Bar has been sympathetically restored to its Georgian splendour using historically correct materials and techniques. The renovation revealed that the interior had undergone many transformations through its life and the restoration to its original condition took eighteen months. Early elements and features have been retained; some of the original handmade bricks have been left exposed on the first floor for display purposes, timber-frame partitions with brick infill, oak-pegged trusses and the original staircase have all been salvaged. 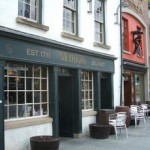