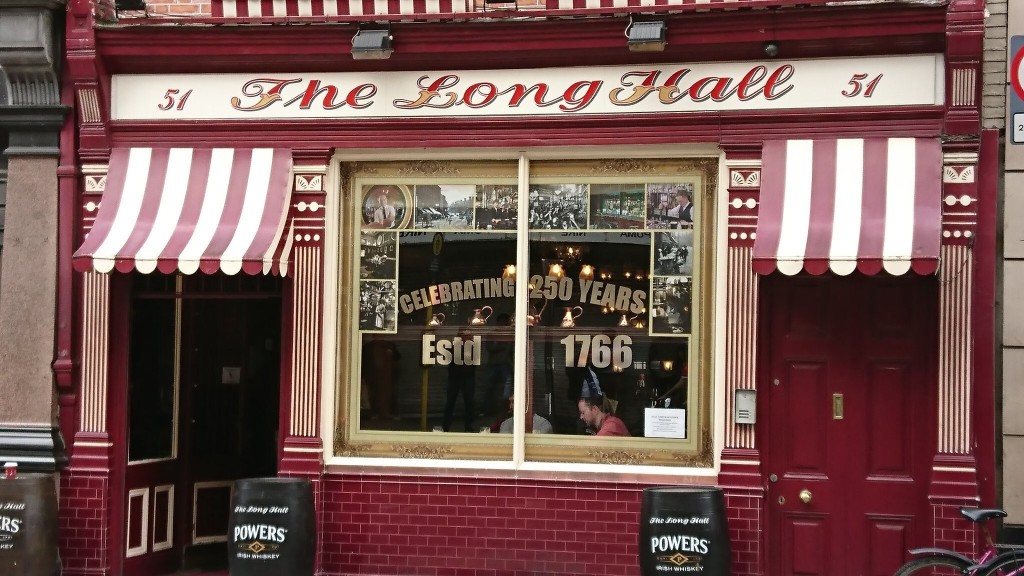 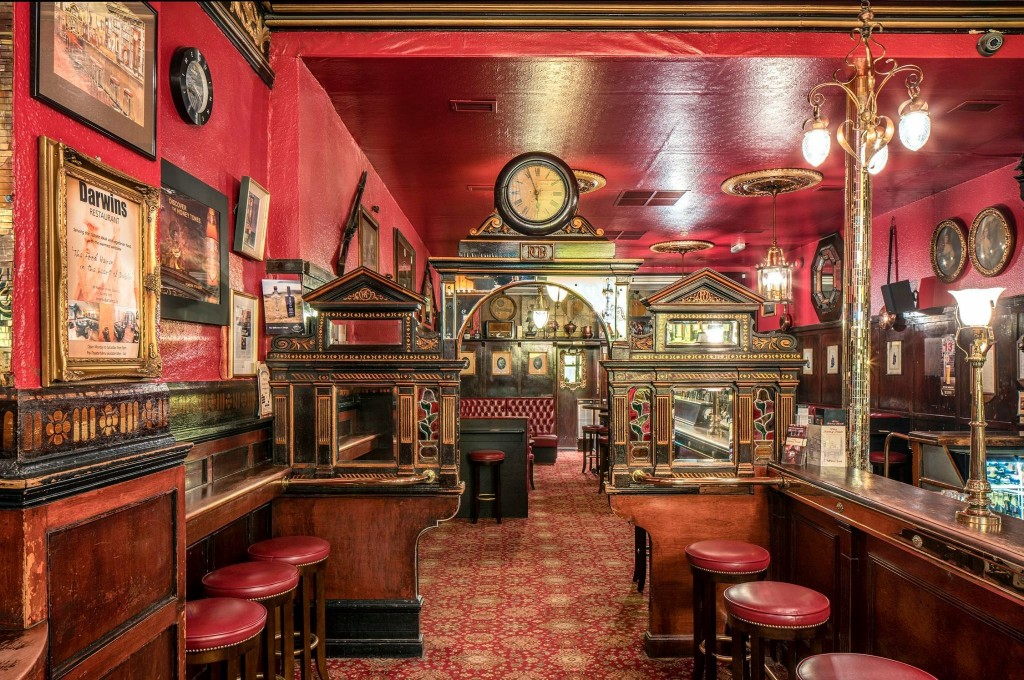 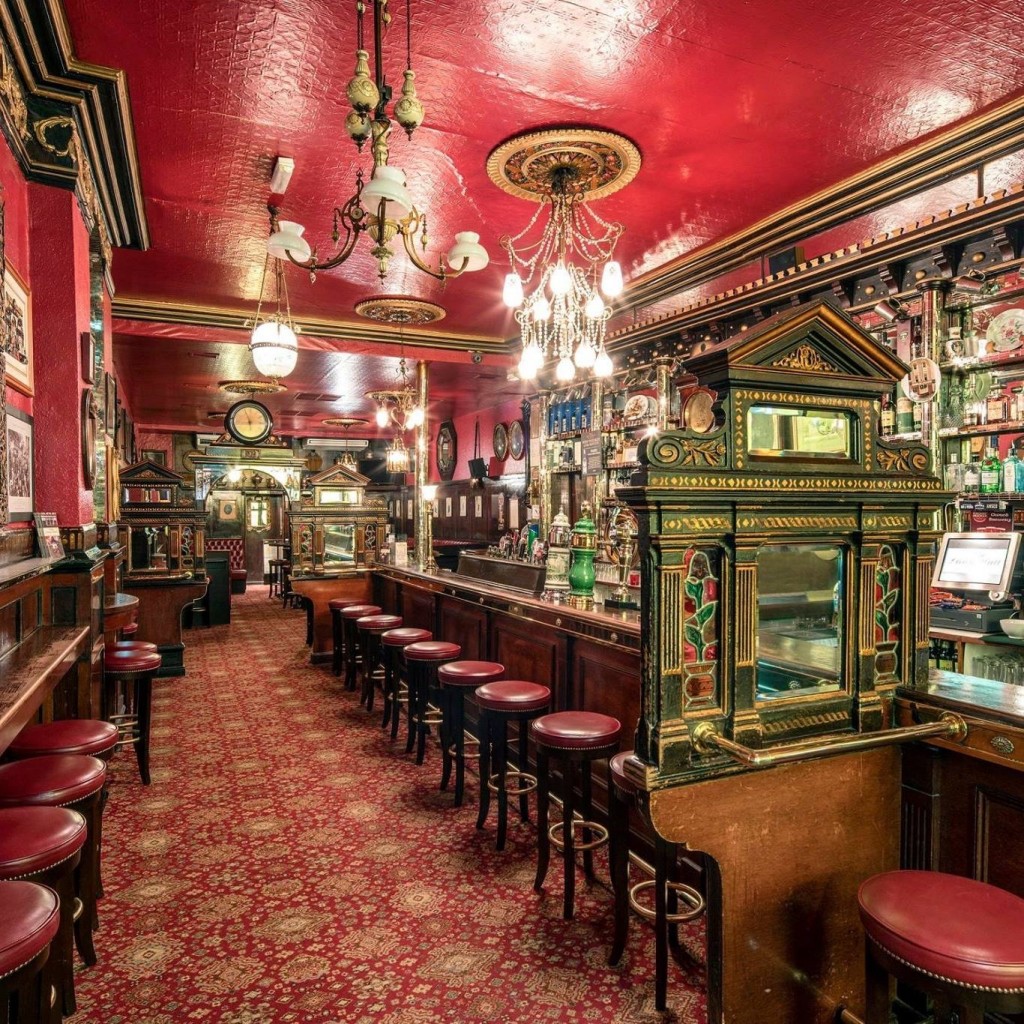 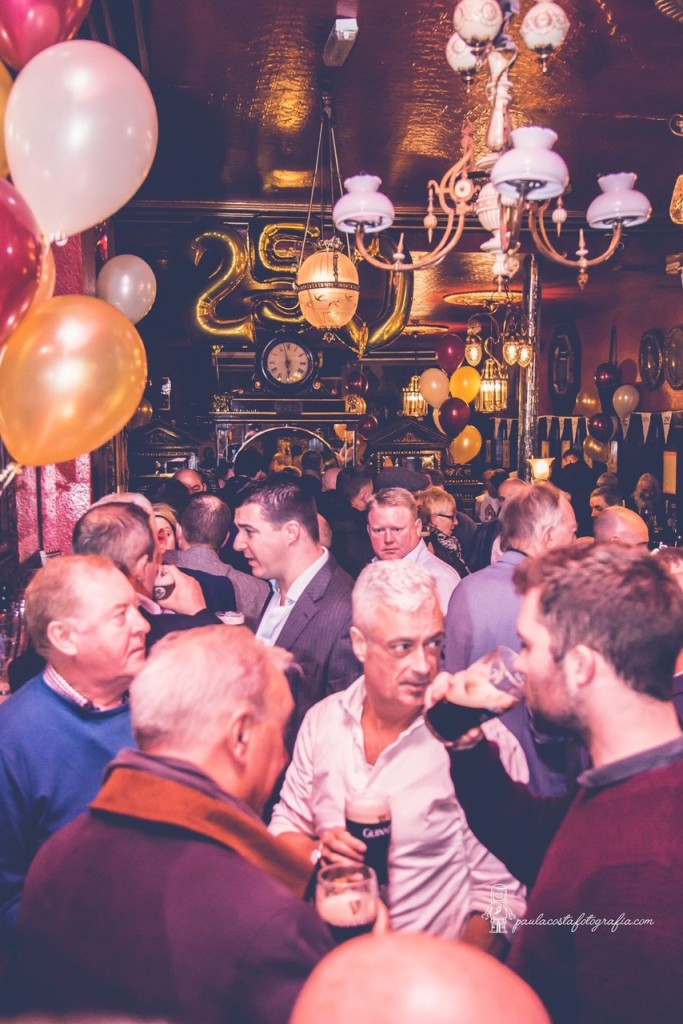 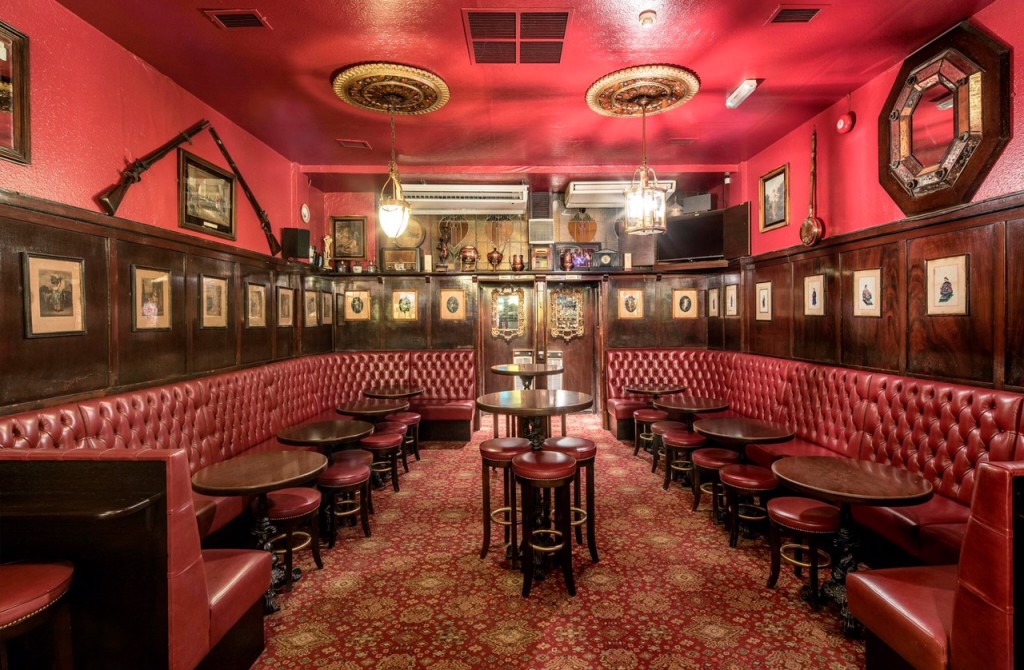 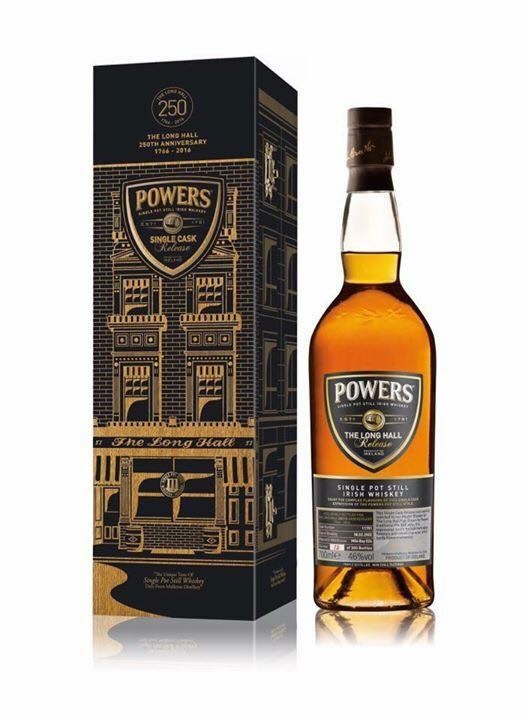 Welcome to the Long Hall, abundant in traditional charm and exuding Victorian originality! Very little has changed here in over 130 years since publican, Patrick Dolan, back in the springtime of 1881 completed the refurbishment of this ‘Affluent Victoriana’ jewel. You will find no pitch pine here or the affectations of Victorian working class pubs; this architectural creation was decidedly in synchronization with the commercial, class structured and socially aspiring image of George’s Street in the Dublin of the 1880s. The pub is the product of splendid Victorian design symmetry in which the sum of its parts including elaborate gold leaf enhancements, meticulous handcrafted wood carvings, beveled and ornate glass all come together to indicate to us this was one of the leading lights of 19th century Dublin publife. Only the finest mahogany of the age was availed of in handcrafting the backbar. There was also a novel design departure for Victorian bars in that the liberal use of mirrors, both concave and convex, intended ostensibly to create the image of a larger premises but especially to challenge and poke fun at the conservative, prudish and austere values of the Victorian age.

‘A Delight to the Senses’

Linger awhile and study your surroundings here! Observe how the fabulous Victorian fittings are sumptuously carved and notice how the counter is dressed with brass trim. View how the pub is punctuated by exquisite partitions off set with gold leaf, ornate stained glass and bevelled mirrors. The lighting is warm, nostalgic and low level, redolent of the Victorian gaslights preserved behind the bar. While you are here take a look at the large Victorian dispensers behind the bar that once held port and brandy. Directly in front of you the thoroughfare leads into a larger rectangular room through an oval shaped, mahogany stained gloss doorway that has a vintage timepiece clock as its focal point. This fitting bears the fine craftsmanship of the Victorian age and wears the patina of its years superbly. For anybody with an appreciation of Dublin’s social history this Victorian pub jewel is a delight to the senses.

There was a licence on this site in 1766 when South George’s Lane became South George’s Street. By 1830 we find Henry Mailey and his son Hezekiah running a busy tavern here in addition to their other pub at 2 Lower Baggot Street. Hezekiah remained here until his death in 1855 after which time his widow Sarah took the reins. She was not a natural publican though and within two years the premises closed its doors for a short time before Patrick Parker, Grocer & Wine Merchant, bought the pub in 1857. At that time there were four premises side by side here, all of whom were in the grocery, liquor and provisions trade.

Fervent nationalist and revolutionary Joseph Cromien succeeded Pat Parker here in the spring of 1864, a departure that within two years would propel this old hostelry onto the pages of Irish history. Within weeks of his arrival the pub had become both a recruiting station and a meeting place for the Fenians and I.R.B. (Irish Republican Brotherhood), an organization dedicated to ending British Rule in Ireland by physical force. On one occasion in excess of 150 Fenians, including Charles J. Kickham, Thomas Clarke Luby, John O’ Leary and John Devoy, were observed entering the premises to attend a meeting. It is known that much of the abortive Fenian Rising of 1867 was planned here and it was here that John Devoy hatched the escape plan to spring Fenian Chief, James Stephens from Richmond Jail in November 1865. But British agents from Dublin Castle had infiltrated both this pub and the Fenian Movement and publican, Joseph Cromien, was arrested here on February 17th 1866 and his pub closed by order of the courts.

Much respected Dublin Publican, Thomas Carroll, bought the premises in 1867 but within four years had sold his interest to a partnership of Robert Reynolds and Patrick Dolan. Dolan soon bought his partner out and in 1881 completed the splendid Victorian renovation you see before you today. By 1898 another great publican William Fitzpatrick was pulling the pints here and the original Frederick Hafner was making his famous pork sausages some three doors away. In 1912 Fitzpatrick added the large clock over the oval shaped entrance to the back room that he had commissioned from Wekler & Schlegel across the street at No. 36. Charismatic Dublin publican, Patrick O’ Brien arrived here in 1941 and was succeed by current owner, Gerald Vincent Houlihan in 1972. Today the premises is run by Gerry’s son Marcus who vigilantly preserves the ethos of this old shrine of antiquity.

The Long Hall & Its Clientele

The title Long Hall is derived from Dublin publore as a consequence of the long narrow hallway snug, no longer part of the pub, that ran parallel to the back bar. Over the years, politicians, playwrights and potwallopers have imbibed here side by side. The Behan family were regular customers and writer Brendan unleashed many a ballad here when publican Paddy O’ Brien permitted singing. Irish rock legend Phil Lynott recorded here the video for his hit-song ‘Old Town’ in 1982. Though this house zealously guards the privacy of its clientele, some its famous regulars have been Bruce Springsteen, U2, Sean Penn and a host of music and movie stars including Rihanna. 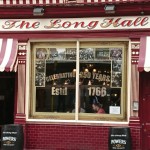 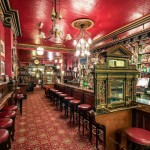 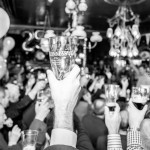 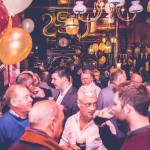